With all of the freezing temperatures across North America recently, it seemed like the perfect time to share this goat birthing story with you. It is one of almost two dozen stories in Deborah Niemann’s newest book, Goats Giving Birth: What to Expect During Kidding Season, where she talks about the good, the bad, the boring, and the heartbreaking.

Niemann commented “At this point I have lost count of the number of births we've attended when temperatures were below zero, but they definitely rank among the most stressful, even if everything with the mama goat goes just fine.”

For days the weather prediction for Sunday night was a low of −13°F, but then on Saturday, they were suddenly saying −3°F, which was certainly music to my ears, because Agnes had not kidded yet. In jest, I posted the following status on the Antiquity Oaks Facebook page on Sunday morning:

Dear Sweet Wonderful Agnes (you know, you’ve always been my favorite) — PLEASE give birth this afternoon at 2:00 p.m., when the high temp will hit 17. If you can’t manage to give birth by sundown, then PLEASE hold on to those kids until tomorrow afternoon, when the high will again be 17. Do NOT under any circumstances give birth in the middle of the night, when the temperature is supposed to be 3 below zero! Your cooperation in this matter will be SO much appreciated! Hugs!!!

A couple of people responded that I had just guaranteed a middle-of- the-night kidding. And they were right. We have a video monitor over the kidding pens so we can watch and hear what’s happening in the kidding barn from the warmth and comfort of our bed in the house. At 2:59 a.m. I was awakened by that familiar scream of a goat giving birth. And this is Agnes, a Sherri granddaughter. If you’ve been around this blog for very long, you know that Sherri and her daughters and granddaughters don’t make a sound until the kid is actually coming out, and they give birth very fast.

Mike and I jumped out of bed and pulled on multiple layers of clothes as quickly as we could. I actually keep all of my layers together — turtleneck inside the sweatshirt and long underwear inside the sweatpants — laid out in just the right position, right in front of the toilet, so that I jump out of bed and go sit on the toilet as I’m changing clothes. Multitasking! Every minute counts when you have a 3-pound, soaking wet kid in sub-zero temperatures.

Mike made it to the barn first and began toweling off the little doeling that had already been born. Only a moment after I arrived, the second kid came flying into this world. I turned on the blowdryer and spent the next hour and a half blow-drying the two little doelings. After returning to the house, Mike checked weather.com, and they said the temperature was −17°F, which would explain why it took so long to dry the kids! We’ve had births in the single digits below zero before, and it took only about an hour to blow-dry the kids, but the colder it is, the harder it is to dry them. I had to hold the blow-dryer within a couple of inches of the kids, and the only part that was being dried was the exact spot that I had targeted at any moment. Every time I switched kids, it was quite obvious where all the little cold, crunchy, frozen bits were. 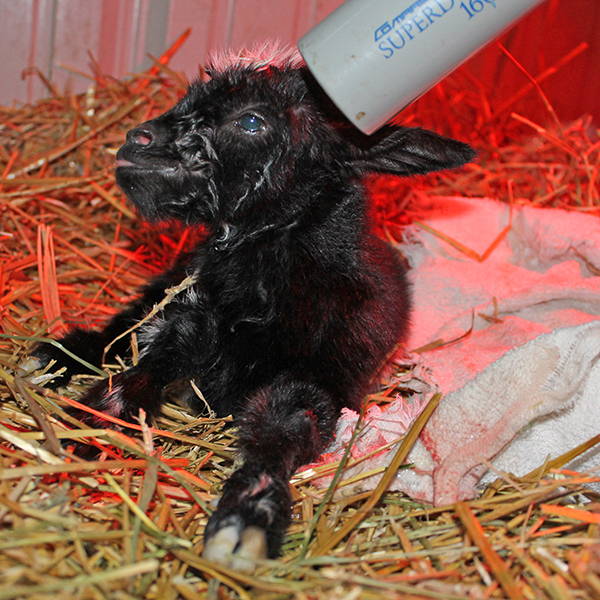 Although one of the kids was pretty quick to start nursing, the other one seemed clueless. We were finishing up the drying, and she still had not tried to nurse. I put my finger in her mouth to discover that it was surprisingly cool and the kid had almost no sucking reflex. I asked Mike to go inside and get a bucket to milk Agnes and then a bottle for the kid. I wrapped the little doeling in the heating pad in my lap until Mike returned with the bucket and bottle. Of course, as soon as the colostrum hit the bucket in that temperature, it was cold, so he had to get a second bucket with hot water in it. We placed the bottle in it to warm up the colostrum. Finally, I was able to get some warm colostrum into the little doe, and within five minutes, she jumped out of my lap, ran up to Mom and started looking for the teat! 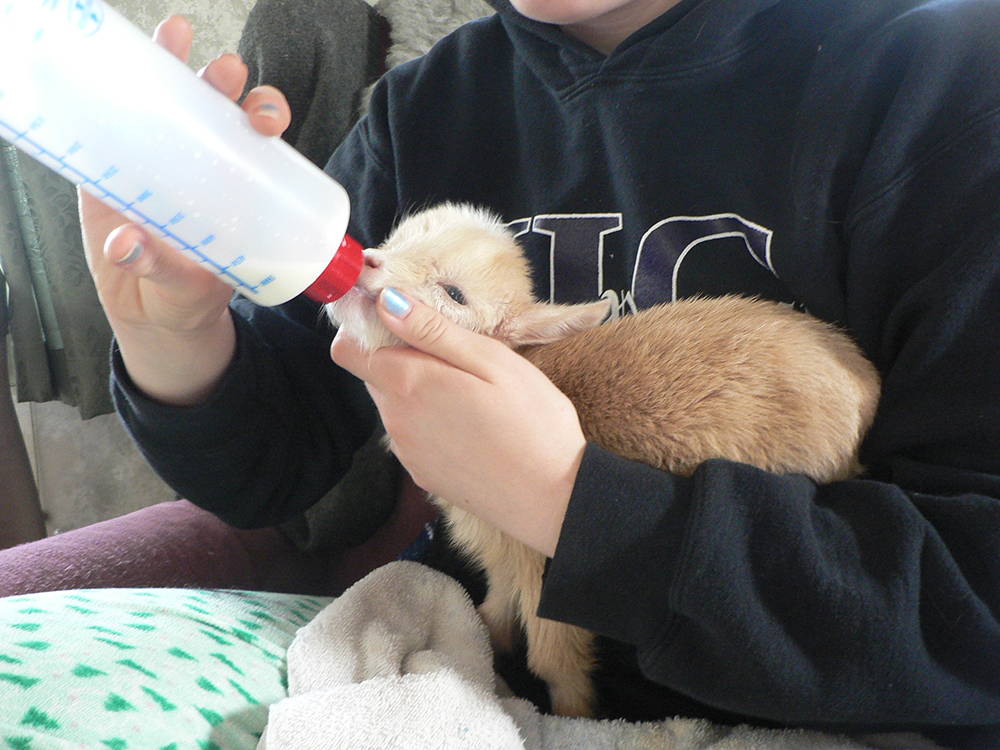 Mission accomplished! It was past 5:00 a.m. when we finally got back into the house. I was frozen and sore, so I got my own heating pad and lay on it for the next two hours, moving it from my feet to my back and neck and everywhere in between. Mike got half an hour of sleep, and then at 7:00, he had to get up to do chores before going to work at the college where he teaches.

I wanted to include this story because it illustrates that challenges come in so many shapes and sizes. It’s not just about the kids being in the right position. Weather during kidding is, however, something that you have some degree of control over. Although you can’t control the weather on any particular day, you can certainly control the likelihood of a sub-zero birth by breeding your does when that is impossible or at least unlikely. Today I breed for March to May kids.

Commenters on my blog following these insanely cold kiddings would always ask why we were having kids in such terrible weather. No, we didn’t have a bunch of accidental breedings. Winter kiddings were part of our strategy to overcome a problem with dewormer resistance. I started raising goats in 2002, when the standard advice for parasites was to deworm the whole herd at one time, deworm and then move to clean pasture, deworm on a schedule, deworm all does after kidding, and rotate dewormers.

Those recommendations were based on assumptions about what would work. Research done in the past ten to fifteen years has shown that those practices lead to dewormer resistance because you are repeatedly exposing the worms to dewormers. Worms that survive the deworming have baby worms that are resistant to the dewormers. That meant that after raising goats for a few years none of the dewormers worked, and goats were dying from worms.

It is true that the stress of kidding can cause a doe to have an increase in her parasite load, but it is not inevitable, and there are strategies you can use to reduce the risk, such as kidding when parasites are at their lowest level on your pasture. For us, that meant kidding in the dead of winter when there were no parasite larvae on the grass. For others that might mean kidding when it’s especially hot and dry. So, although the doe’s egg count might increase, it won’t negatively affect her because she is not increasing the load even more by ingesting larvae in the pasture.

I discuss internal parasite control in goats as well as dewormer resistance in more depth on my Thrifty Homesteader website, thriftyhomesteader.com, and in my book, Raising Goats Naturally. 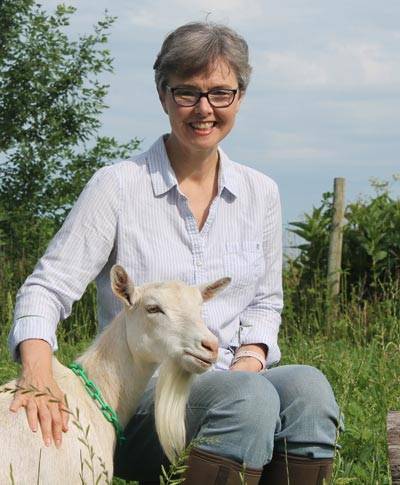 Deborah Niemann and her family moved to the country in 2002, and soon 2 goats turned into 20, and a desire to make a simple chèvre launched a new career helping people raise goats. Deborah is the author of Homegrown and Handmade, Ecothrifty, and Raising Goats Naturally. She blogs at thriftyhomesteader.com from her farm in Illinois. Make Crackers at Home with Your Sourdough Starter